Well, he wasn’t born this way. Apparently when he was an infant he suffered from Hydrocephalus (where hydro means water and cephalus means head in Greek). This means that excessive fluid builds up in the brain and this puts pressure on the brain tissue, which can cause some pretty nasty symptoms, like such as vomiting, nausea, blurred/double vision, paresis (muscle weakness, which can cause some paralysis), ataxia (balance problems, poor coordination, gait disturbance), and so on.

To stop this from happening a shunt can be placed which drains the excess fluid into the bloodstream, which is what our civil servant had done at 6 months old. He then had surgery again when he was 14 years old because he suffered from ataxia and some leg paresis. From then on he lived a normal life with a job, a marriage and two children and an IQ of 75. Unfortunately, during that time the excess fluid somehow leaked into his brain again and pushed his brain to the edge of his skull. Not good. When he reached 44 years old he went to the hospital to complain about a mild muscle weakness in his leg. It was only then that doctors discovered that 90% of his neurons had eroded away. Incredible! 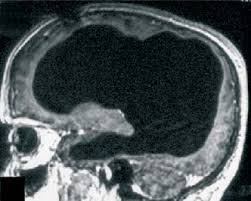 Now you’re asking what does all this have to do with consciousness?

So how can this be?

Plasticity is a fancy name for how the brain physically changes when we learn. This can be small changes to individual neurons or whole changes to the brain, which can happen if the brain is injured. Axel Cleeremans of the Université Libre de Bruxelles believes that the slow erosion of the neurons and brain structures is what gave our civil servant’s brain a chance to adapt and survive. You can watch this video on Neuroplasticity by Sentis to get a better idea.

It’s rare nowadays to come across an experimental study with “consciousness” in the title. The top search results for consciousness are mostly experiments dating back to the 70’s and 80’s, or reviews about the research problems surrounding consciousness. This is partly because of discoveries like our civil servant and many Neuroscientists are now using the term “working memory” instead. I found this out from a friend I met in my neuroscience course who is now doing her PhD on working memory.

So what is working memory?

Working memory is a memory system that’s involved in acquiring knowledge, learning new skills, and directing them to appropriate parts of the brain. For example, important moments are directed to our long-term memory and stored. Working memory is also linked to plasticity because you can improve your working memory through training and the training effects can be seen in the areas of the brain that are involved in doing cognitive tasks (frontal cortex, parietal cortex, basal ganglia, etc.).

Working memory overlaps with many theories of consciousness, but the difference is that working memory could “work” for our civil servant’s situation (excuse the pun). When our civil servant’s brain was going through a serious plasticity make-over, the parts of his brain involved in working memory were made to adapt and therefore it’s possible that they were able to continue carrying out their tasks. However, this is just my two pennies worth on the subject, so don’t take it as gospel.

If you take anything away from this blog post, remember how adaptable our amazing brain actually is.

Back to the top

Cleeremans, A. (2011). The Radical Plasticity Thesis: How the Brain Learns to be Conscious. Frontiers in Psychology, 2, 86.

This is a blog about my biggest interests - Psychology, Neuroscience and UX. I love to write, especially about people, oddities and research! Hence this blog. I like to post (and repost) new and upcoming research, news articles and reviews in easily digestible bites. View all posts by Alison Holland